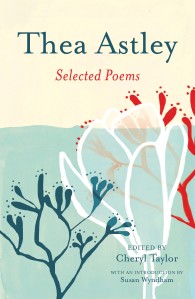 This collection illustrates Thea Astley’s rarely acknowledged passion for poetry. The way verse contributed to her development as an Australian literary icon is often overlooked, let alone documented so insightfully. Editor, Cheryl Taylor, has compiled Selected Poems in so that Astley’s writing seems unearthed, precious and intimate. The poems are arranged in chronological order, along with careful biographical notes, documenting Astley’s growth from schoolgirl to celebrated and cerebral author. By tracing her making through her poems, the collection shows the formative writing processes that led to her renowned style. The book is an unfurling of Astley’s progress, in both writing and living.

Thea Astley is best known for her fiction. She published seventeen novels, received the Miles Franklin Award four times, more times than any other author in her lifetime, and wrote until her death in 2004. In 1989, she won the Patrick White Award for her contributions to Australian literature and her novels have received numerous accolades. Works such as The Well-Dressed Explorer (1962), The Slow Natives (1965), It’s Always Raining in Mango (1987), The Multiple Effects of Rainshadow (1996), and Drylands (1999) are testament to Astley’s artistry. Unsurprisingly, her propensity for lush imagery and the precision of her syntax is well suited to poetry. Across the two modes, there is a persistence of themes and style: an affinity for water and the Queensland landscapes of her youth; a dexterity and opulence in her language; and a humour and ferocity in her social commentary.

Selected Poems were collated from Thea Astley’s archive in the Fryer Library, University of Queensland, which contains over two hundred poems, mostly from two lined schoolbooks. About twenty-five pieces were published during her lifetime. Most, however, were produced very early in her writing career. As expected in a chronological collection, the best work appears later in Selected Poems and most of these have never been published. The section Adulthood includes pieces from Exercise Book B in the archive. It appears Astley originally gathered these poems for a collection, but abandoned the project. These pieces, and Astley’s use of first-person narration within them, are the most revealing and eloquent in Selected Poems.

The first half of the collection contains the poems Astley produced in her childhood, adolescence, and student years at All Hallows Convent in Brisbane and her time at University of Queensland, until the age of 20. The initial poems, mostly from Exercise Book A, seem as if penned between the margins of textbooks: they are youthful, sentimental and full of zeal. It’s easy to imagine a teenage Astley, in wartime Brisbane, in the pages: her fondness for landscape and dreaming; her spirited accounts of first love. Phrases such as ‘shadows hurled/ With windy cloaks like swelling waves’ and ‘chained to a tottering world’ in ‘Poem [1]’ foreshadow the themes, style and sound patterning which feature in her later fiction. When Astley, interviewed in 1990, referred to writing ‘poetry in adolescence’ as though it were an affliction, she was likely recalling these poems. She referred to them as ‘a form of acne – I think I’m having a poem’. Although this hardly applies to Astley’s work – which, even so early in her writing career, is ripe with careful sensory detail and demonstrates her growing fascination with language and lyrical conventions – it is interesting to keep her dismissal of her early poetry in mind. There is a strong self-awareness in her adolescent poems. In ‘Creation’, she wrote of ‘loneliness’ and her impatience to experience the world, stating it ‘must be part of my making’. Her cry, ‘But O God! The pain in the making’ is satirical and self-deprecating; yet, as the ambition in her poems reveals, she was inspired and energised in her creative development. During her university years, this determination grew and she experimented with traditional forms and meter. Her work, which involves allusions to classic poetry and translations of French lyric poets, shows her honing her skills through emulation.

The poems in the second half of Selected Poems are sharper, wittier and, in their preoccupation with nature, stronger and more specific. From Exercise Book B, these poems were created between 1945 and 1957: a time of significant transition in Astley’s life. Her courtship and the early years of her marriage to husband, Jack Gregson; the resulting estrangement from her parents; moving to various parts of Australia; and her work as a high-school teacher: inklings of these biographical traits leak into her poetry. Astley’s poems move through remembered spaces and map the landscapes and seascapes of her youth. She wrote sonnets to Queensland islands in ‘Magnetic’ and ‘Whitsundays’; described ‘rhyming beaches’ and ‘the blue sea… sucking the shore’s white rind’ in her poem ‘Dunes’. However, when the scenery leaves her cold, such as that in ‘Hunters Hill [1]’, she is just as poetic:

When you see this flattened landscape
Creeping like a tired crustacean
Over a sea-bed; when you see
Tired claws of suburbs scrabbling
At the greenness; pray for us now.

As in her fiction, Astley’s poetry often describes the drudgery of suburbia and small towns. In ‘Hunters Hill [1]’, she writes of returning to a mythical Queensland, stating ‘my feet, time-tortured, crave / Familiar floors.’ The ambivalent feelings she conveys towards her surrounds – changes of residence, travel, nostalgia, her relationship with her husband – recur like the ‘rain’s incessant drumming’ in her poem ‘A Warning’. Rain and movement in bodies of water are enduring themes throughout the Adulthood section of Selected Poems; their descriptions are among the most memorable and moving of Taylor’s selection.

The majority of Thea Astley’s poetic output is included in this collection, offering a rare and very personal view into her life and creative process – more personal, perhaps, for the moments of imperfection in some poems. Watching Astley refine the skills and imagery she accomplished in her fiction is where the real pleasure in reading Selected Poems lies. While the collection may be unremarkable for readers indifferent or unfamiliar with her fiction, Astley’s innovative contributions to Australian literature and the full scope of her creative work deserve to be acknowledged and Cheryl Taylor does this elegantly.

Emma Cooper is a writer living in Sydney. She is working on a novel called The Horizontal Woman and studying a Master of Creative Writing at the University of Sydney. Emma is originally from Cairns, Australia.