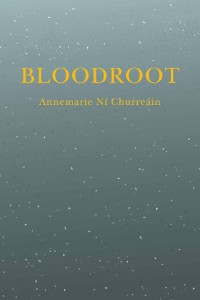 I was in Dublin in the week leading up to Christmas 2017 and went shopping for some contemporary Irish Poetry only to find there had been a “Christmas rush” and a number of titles were in very limited supply. Coming from Australia the notion of a pre-Christmas rush on poetry came as a bit of shock, but I eventually managed to track down most of the items on my list (as well as a few extra). One of the titles I eventually had to mail back to Sydney in order to avoid excess baggage charges was Annemarie Ni Churreain’s debut collection Bloodroot.

It took me some time to get around to reading Bloodroot, but the experience was well worth the wait. This is an extraordinary connection, finely crafted and rooted in place, politics and history. While obviously written from an Irish perspective there is much here which also has an immediacy for an Australian reader. The poems about institutional child abuse, the forced separation of mothers from their children and reflections on the same sex marriage debate will all appear familiar.

The simple dedication “for my Foremothers’ hints at the power of some of the poems to come and, indeed the opening poem ‘Untitled’ is unexpectedly complex and compelling. The title of the poem takes on added significance in the context of the rest of the collection – it is not just the poem that is untitled but also the speaker/poet. The unnamed poem searches for an identity as did the children separated from their mothers by the church controlled state:

The first time
a tree called me by name,
I was thirteen and only spoke a weave of ordinary tongues.

The poem ends with a hint of discovery:

Come Underground, they said.
See what you are made of.

The poem ‘Penance’ which is dedicated “for a girl in trouble 1951” is one of the most direct poems in the collection. There is an anger here woven into the finally crafted words which has only been made stronger by the passage of time:

A man of cloth will come,
Your new home is among brides.

and when they cut short your hair,
watch the cuts fall

like the soft fur of an animal
held still by threat.

This them is continued most powerfully in the title poem of the collection ‘Bloodroot – at the Castlepollard Mother and Baby Home:

Behind the gates, a black awakening of trees.
Were you made to kneel here too, Mary Josephine, Bernadette?
…………………..If I call you by your house-names will you speak?

I did a little research on the Castlepollard Mother and baby Home and discovered that it was run by the Order of The Sacred Heart for 35 years from 1934. During this time the Order never employed a doctor or nurse, only a single mid-wife as required by law. During this time 3,763 babies had their births registered. It is estimated that over 500 babies died and were buried in shoe boxes in a small piece of land down a lane way. After reading this I reread the poem and felt the anger and sadness rise in me as I remembered our own Royal Commission into institutionalised child abuse, a court case I cannot comment on and the Lost Generation of Aboriginal Children.

The power of these poems comes not just from the subject matter but from the fact that these are finely crafted and realised poems. They are driven by the strength of the imagery, the internal rhythm of the poems and even how they appear on the page.

Central to the success of this collection is the sense of place and history Ni Churreain conveys. Some of this history, is of course the history of the abuse of women and children at the hands of the Church/State, but there is also an older history here vitally connected with space:

It will answer in bog-tongue
and occasional fire,
burning back the earth
along the heather-stream

despite bald heels of rock,
despite the kissy mink,
despite a saintly air

until the stream runs dark
with what needs
to blacken out of you.

And again in ‘Doire Chonaire’, which is dedicated “for a grandfather unknown”, we once again get this break in history and a striving to make connections:

To you I owe my thirst………For a name
gets passed down through the spear side
in the underland streams that pulse with clear meaning
and thrive towards the lips
……………………………………………..A name is how we match
our tongues to the source and taste our own sediment.

There is much to enjoy in this poem, the long lines that break just when you think you might be reading a prose poem, the gaps and spaces in the poem which suggests the break across generations and the use of words such as “spear side” and underland” all add to the depth of the poem.

Place returns in poems about India and Florida. In ‘Where We Come From’ we learn:

This is the Florida I will remember,
a hooded place where the moss hangs

like a lamp-lit silk, peeled from the body
and discarded among the boughs.

– Where We Come From

This is a very different world to the “underland streams” but the strength of the imagery is just as strong.

The poetry in this collection is so finely crafted and alive with language and meaning that it hard to believe that Bloodroot is a debut collection. I am hoping that there was another run on it in the bookshops of Dublin leading up to Christmas 2018.

Mark Roberts is a founding editor of Rochford Street Review and lives in the Blue Mountains west of Sydney. His latest collection of poetry, Concrete Flamingos, was published by Island Press in 2016.

Bloodroot is available from   https://www.doirepress.com/writers/a_f/annemarie_ni_churreain/