The 62nd Sydney Film Festival kicks off on 3 June. In the first of three pieces over the next week Mark Roberts previews some of the festival highlights. In this first piece he concentrates on some of the Australian films that will be screening at the festival. 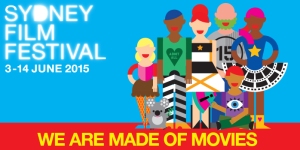 It has been a few years since I actually covered the Sydney Film Festival as opposed to attending screenings without the intention or requirement to write up a review or to provide and overview of the festival. This probably explains why I have been remembering the first time, back in the mid 1980s, when I received a media pass and found myself rushing back and forwards from the office to the State Theatre with a notebook, a pencil and an ever growing list of deadlines. From memory it was 1985 and I was working as the reviews editor of Tribune. I had a list of films to write on, most of them political documentaries or features from the Eastern Bloc countries plus the occasional East German musical. It was also the year that the Jean-Luc Godard film Hail Mary was screened at the festival. On day two or three of the festival I was rushing along George Street to get to a screening of, I think, one of the East German musicals and took a shortcut down the little lane way that came out next to the State.

As I emerged onto Market Street I was confronted by an angry mob – but it wasn’t your normal angry mob. There appeared to be large number of chanting nuns and banners proclaiming that the ‘Legion of Mary’ was not happy. I was trying to figure out what was going when I was struck heavily on the back of head with a large wooden crucifix. I remember dropping to my knees and then being helped into the theatre by a security guard. I was then caught up in the rush of people who had made it past the increasingly violent protest and carried into the theatre where I found a seat and tried to focus on the screen.

Still feeling the effects of almost being knocked out it took me some time to realise I was not watching a East German musical. Finally breaking a film festival taboo I asked the person in front of me what was showing. It turned out I was watching Hail Mary which had been due to be shown some four hours earlier but had been delayed due to a series of bomb threats. I can’t remember much about Hail Mary and spent the rest of the afternoon and some of the evening at RPA being checked for concussion and missed the next three days of the festival.

Looking through the program for this festival I couldn’t find a movie which, by itself, would bring the crucifix bearing mobs into the streets. That is not to say however, that the 62nd Festival lacks excitement .

I recently heard, during a discussion about the impact of the budget cuts on the Arts, that Australian cinema has lost the “punch” it had 30 years ago, and that this lack of vitality, which is reflected across the arts, was one of the reasons why governments found it much easier these days to attack the funding base of Australian culture. While such a comment probably reflects a slightly selective memory of recent Australian cultural history, one could also point to the strong line up of Australian films in this years festival as evidence that we still have important stories to tell and we can tell them with passion and skill. Perhaps the thing that is missing is the committment from governments to provide a viable funding structure to ensure these stories can be told into the future.

Ruben Guthrie, the directorial debut of award-winning playwright, screenwriter and actor Brendan Cowell, opens this year’s festival. Cowell adapted the film from his own play which premiered at the Belvoir in 2009. The film follows the main theme of the original play – Ruben Guthrie is an advertising man leading a party boy lifestyle with a model fiancée and a house on the water. He also likes a drink or three. He’s at the top of his game, until some drunken skylarking suddenlly brings him down. His mum hits the panic button, and then his fiancée  leaves him, but not before issuing him one final challenge: If Ruben can do one year without a drink, she’ll give him another chance” With a strong cast featuring Patrick Brammall, Alex Dimitriades, Abbey Lee, Harriet Dyer, Jeremy Sims, Brenton Thwaites, Aaron Bertram, Robyn Nevin and Jack Thompson, Ruben Guthrie is a film to look out for.

Another potential standout Australian film is Jeremy Sims’ Last Cab to Darwin. The film, which is loosely based on an actual event, follows Rex, a Broken Hill cab driver who is told he has less than three months to live, as he drives his cab from Broken Hill to Darwin where he believes that the recently past euthanasia laws will allow him to end his life on his own terms. Once again there is a cast that suggests that this will be a special film featuring Michael Caton, Mark Coles Smith, Emma Hamilton and Jacki Weaver. An added bonus is that Ed Kuepper has provided the original soundtrack to the film – something that by itself would ensure that Last Cab to Darwin would be on my must see list.

Turning to documentaries one of the more interesting Australian documentaries at this yerar’s festival is Gayby Baby. Director Maya Newell has said of the film “I am a gayby (a person with same-sex parents) and I want to make a film about kids growing up in families like mine”. Told from the perspective of the kids, the film is about the experiences of the newest generation of gaybies, as well as a film about what family in the 21st century might mean.

Among the other Australian movies to look are  – directed by Shakthi Sivanathan and Guido Gonzalez and set in Cabramatta, Simon Stone’s The Daughters and Neil Armfield’s Holding the Man which will close the Festival on 14 June. In addition there are ten Australian documentaries competing for The Documentary Australian Foundation Award and another ten leading Australian shorts competing for the Dendy Awards for Australian Short Films.

So while comparisons between the vibrancy of the Australian film industry in the 1980’s and that of today might be problematic, the depth of Australian talent on display during this year’s Sydney Film Festival would suggest that any decline is not due to lack of talent, commitment or passion on behalf of our filmmakers or actors.

Mark Roberts is a Sydney based writer and critic. He is the editor of Rochford Street Review.

Full detials on the Sydney Film Festival can be found at http://www.sff.org.au/