The opening film of the Golden Koala Chinese Film Festival Heukseok Kids is a clear message of the festival intentions of both showcasing new Chinese cinema as well as to present the works of up and coming directors.

Heukseok Kids tells the tale of Defu, a Chinese film student based in Seoul, after 8 years overseas, he is informed of his mother’s terminal illness and has to return home. When Defu returns home, he not only has to come to make amends with his dying mother, but also discover his role in his dysfunctional family as a husband and father. 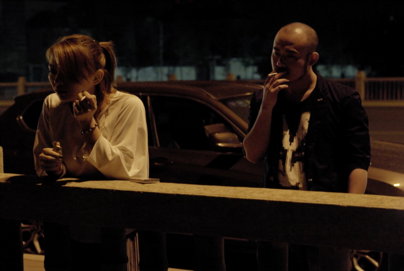 Arthouse features have a tendency to be extremely personal pieces of celluloid. Unlike commercial fare, the vision of the filmmaker takes priority over all commercial considerations, this is the case with Heukseok Kids, which is based on Chinese director Liu Defu (whom the character of Defu is named after) experiences living overseas in Korea as well as in his home country of Mainland China.

This personal quality permeates through all levels of the film, its screenplay, its performances and its cinematography. There is a sense of intimacy in the narrative, we are always close to Defu and his narrative transformation. The sequence in Korea features a confident, even more virile representation of Defu as a character, he is outgoing, engages in one night stands and cracks jokes with his food photography obsessed Korean friend. However, upon his return to China, all Dionysian traits are drained from his personality, as he comes face to face with, and at times fall short (due to his time abroad) of his responsibilities as a man in Chinese society. This Dionysian/Apollonian dichotomy is novel in its concept, and is an issue that is a rarely explored facet of Chinese cinema.

The film services extremely well as a character study of Defu but due to its prioritizing of its protagonist, it fails in developing its secondary characters, with most of them being reduced to caricatures that we know all too well. The bitter wife, the bum brother, the quiet and hapless father. The secondary characters serve more as shattered reflections of the protagonist than actual characters, every interaction with them only serves to inform us more on Defu, his past actions and their consequences than on the other characters themselves. This is not necessarily a bad thing, the narrative’s myopic focus on Defu actually paints a fascinating portrait of a man stuck in two cultures. A brilliant example of this is Defu and his wife’s discussion about their passionless marriage and his obligations as a husband and father, his wife carries much of the dialogue of this scene but it is Defu who gets the bulk of the character development, as he sits on the couch, too preoccupied texting his Korean buddies. He doesn’t care.

The narrative does take a weaker turn, as it limps to its ending, as Defu becomes a more confused and conflicted character, so does the narrative. The first two acts are strong in its execution of theme and tone but it abruptly ends with nothing resolved. I do understand that a film does not need to answer all its audience’s questions but while the build-up is consistent on the first two acts, we do not see any pay off for all the character development that was invested in Defu and that may leave some people wanting.

The cinematography isn’t beautiful in the aesthetic sense of the word but brings a poetic elegance to the film. Great cinematography has always been misunderstood as ‘great looking images’ but these images may distract from the narrative. This is not the case with Heukseok Kids, as the cinematography, while at times ugly, serves the story first, it is realistic and borderline documentarian in its approach. The world of Heukseok Kids is a claustrophobic one, constant use of over the shoulder shots and tight mid shots imprison Defu into the frame. An even bigger marvel is witnessing how Liu Defu (The Director) manages to make wideshots look oppressive and contrainted, one of the most haunting images of the film comes in the form of Defu (The character) eating in the corner of a dark living room, with old photos of family members and ancestors hanging prominently on the walls behind him. The message is clear, Defu is failing to live up to tradition.

While the dysfunction of youth is a strong theme, the film offers a stronger examination of Chinese tradition. The male characters constantly fail constantly at being a ‘Chinese Man’, images and ideals that are set upon them whether through tradition or family. In a memorable scene, Defu’s daughter realizes that her father himself is also still a student, like her. Despite Defu being a father, as a student, he is unable to fully provide for his daughter, likewise to Defu’s brother, who in their father’s words, is a ‘loser’, more a hindrance than a provider to the family. On another note, the father daughter scene brings to fore Chinese society’s obsession with education and how this obsession has become a tradition, unchanged for generations, from father to daughter. Which adds an interesting crease to how we view tradition, if we don’t go against it, wouldn’t all our outcomes be the same?

At its source, Heukseok Kids is a film about questions. It questions the strict traditions of Chinese society, it questions its protagonist’s role in his life, most of all, it questions the importance of your obligations versus your aspirations. While it does not provide a solid answer nor a satisfying pay off, Heukseok Kids is nonetheless a strong debut from a talented young director and provides a thought provoking time at the movies, one to ponder over drinks with friends.

A strong, if at times uneven meditation on the role of the man in contemporary Chinese society. Like the best of arthouse cinema, it is the questions they raise that are much more satisfying than the answers.

Lost In Translation- All millennials should watch this movie. Beautifully written and acted film about loneliness and alienation in the big city.

Taxi Driver- Like how Heukseok Kids confront the idea of what a man is and should be in Chinese society, Martin Scorsese’s masterpiece does the same (and goes further) with American society.

Caché– Heukseok Kid’s narrative structure and visuals bears resemblance to Michael Haneke’s frustrating meditation on the scars of French colonialism. From its ‘drop  off’ third act to its realistic, if mundane visuals of everyday life.

Perry Lam is an Associate Editor of Rochford Street Review. He is the director of  the documentary short film BLACK RAT  has been selected for numerous film festivals both in Sydney and overseas.  https://rochfordstreetreview.com/2016/02/02/welcome-perry-lam-rochford-street-review-associate-editor/

The Golden Koala Chinese Film Festival kicks off on 2nd of February 2017 and takes place at venues across Australia. For further information go to http://www.cff.org.au/.